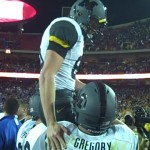 The Missouri Tigers and Kansas Jayhawks combined for 1,100 total yards of offense, but it was a three yard sack for a safety and a 27 yard field goal by sophomore Grant Ressel that will put this game in the books as one of the greatest MU-KU games as the Tigers rally to beat the Jayhawks 41-39 and win the Border Showdown at Arrowhead Stadium.  CLICK HERE TO WATCH EXCLUSIVE POSTGAME VIDEO ON THE FIELD. 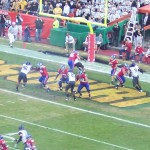 Kansas struck first on their second possession of the game. After Jake Harry backed KU up to their 2 yard line on a great punt, KU was faced with a 3rd and 11 following a penalty. Todd Reesing found Jake Sharp on a first down pass over the middle. Reesing then hit Bradley McDougal for another long pass with a 15 yard late hit penalty tacked on. After an 18 yard pass to Dezmon Briscoe, Reesing scrambled to the Mizzou 11. Two plays later, Reesing hit Briscoe for a six yard touchdown pass capping a nine play 98 yard drive and a 7-0 lead.

On the ensuing drive, Blaine Gabbert showed his running ability by taking off for 31 yards down to the KU 41. The Tigers would stall, but Grant Ressel would hit a 43 yard field goal to cut the KU lead to 7-3 with 3:52 to play in the opening quarter.

KU wasted little time moving back down the field on back to back passes to tailback Jake Sharp who took KU down to the 26…an illegal block call on first down backed the Jayhawks to the MU 41. On 3rd and 18 from the 34, Reesing found his tight end Tim Biere on a pass up the middle for 33 yards giving KU a first and goal. Reesing went in on the next play from one yard out for a 14-3 lead.

The Tigers were torched by Reesing for 162 yards in the first quarter. KU did a good job of limiting Danario Alexander who had just two catches for five yards in the first quarter. Alexander got a 10 yard pick up in the second quarter. On a 3rd and 15, Mizzou caught a break on a pass interference call on Chris Harris who looked to have good coverage on Wes Kemp. On fourth and two from the KU 32, Gabbert found Alexander for a six yard pass to keep the drive alive. On the next play, Gabbert started to scramble and then stepped up to throw but was blindsided by Maxwell Onyegbule. Gabbert coughed the ball up and KU recovered at the 25.

The Mizzou defense would come up with a turnover of their own. With just under seven minutes to go in the first half, Dezmon Briscoe was stripped after a pass completion and Carl Gettis returned the fumble down to KU’s 5. Three plays later Washington went in for a two yard run and Mizzou cut the lead to 14-10.

Briscoe made up for his miscue when he caught a 3rd and nine pass from Reesing and picked up 33 yards down to the Missouri 8. Reesing then found Kerry Meier for a score on the next play to go up 21-10 with 3:03 to play in the first half.

Gabbert took off running again and gained 40 yards to give Mizzou a first and ten at the KU 11 with 1:30 to play in the second quarter, but Mizzou would have to settle for a Ressel chip shot to make it 21-13. KU returned the kick to their own 49, but Reesing was picked off by Kip Edwards and Mizzou had the ball at midfield, but three incompletions forced a punt and the end of the first half.

Reesing was 24 of 32 for two touchdowns and 256 yards with that late INT. Briscoe had eight catches for 89 yards and Jake Sharp with seven catches and 72 yards. Gabbert was just 12 of 25 as he missed high on a lot of his passes for just 100 yards, but he gained 93 yards on nine rushes. Gabbert could not find Danario Alexander as his favorite receiver ended with just five catches for 30 yards. 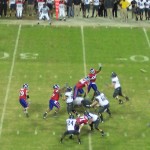 Alexander finally got going in the third quarter. A 29 yard pass gave Mizzou a first down at the 26. Washington then had a 12 yard gain on the ground. From 14 yards out Washington ran it in for another score to make it a 21-19 game. Mizzou lined up for a two point conversion then had to burn a time out. Gabbert was stopped on a three yard loss and the score remained 21-19. Prior to his two runs of 27 yards, Washington had 17 yards on seven carries.

KU drove the field again and after it looked like Mizzou would hold KU to a field goal, an unsportsmanlike penalty was called on Sean Weatherspoon for hitting the center before he was allowed on the FG attempt. It gave KU a first and goal from the six. On third and goal from the two, Reesing found Meier on a fade pass to put KU up 28-19.

The Tigers answered right back on their next possession on a four play drive capped by a 37 yard run by Jerrell Jackson on a reverse to make the score 28-26 with 5:45 to play in the third. With KU driving, Carl Gettis stripped Briscoe of the ball again inside the Tigers 30 and Mizzou came up with another turnover at their 28. Two plays later, Gabbert found Alexander for a 68 yard touchdown pass after Alexander’s defender slipped around the 45. Alexander turned on the after burners and was gone.

KU answered with a three play drive capped by a 74 yard pass from Reesing to Briscoe. The two point conversion made it a 36-36 game. It was Reesing’s fourth touchdown pass of the game.

After a three and out, KU was backed up inside their one on a 53 yard punt from Jake Harry, but on third and five from the five, Reesing found Briscoe for a 27 yard pass. Their seventh third down conversion in 10 chances. On a second and 10, Reesing swung a pass out to Rell Lewis who ran 42 yards to the MU 26. That pass gave Reesing 481 yards passing a KU school record. He kept adding to his record on a pass to Briscoe which brought up a third and one from MU’s 15. Converting for the eighth time, Lewis ran down to the MU six for a first and goal. After a one yard run and pass incompletion, it was another third down from the five and Reesing was pressured by Andrew Gachkar and Kevin Rutland. An intentional grounding call was flagged on Reesing forcing a 38 yard field goal attempt which was good to give KU a 39-36 lead with 5:10 to play.

Missouri got the ball back, but had to punt after Derrick Washington slipped on a third and one forcing a punt. The Tigers would need a three and out (something they didn’t do all game) then get the ball back and try to score. Harry’s 53 yard punt backed KU up at the three yard line…Harry’s third punt inside the three. Forget that after his previous two punts down to the one, KU scored. This time the Tigers sacked Reesing on third down making the score 39-38 with 2:45 to go.

Mizzou took over at their 48 off the free kick and on 3rd and 2, Washington rushed for 27 yards down to the KU five. The Tigers took a knee twice setting up Grant Ressel’s game winning field goal of 27 yards as time expired to pull off the incredible 41-39 win.

After the game, head coach Gary Pinkel said he never second guessed his decision to punt the ball down by three and just felt field position and the ability to stop the clock once played in his favor. As it turned out, it worked in Missouri’s favor.

Alexander finished with 233 yards on 15 catches. Washington rushed for 115 yards on 15 carries while Gabbert threw for 303 yards and rushed for another 107. Between the two teams, there were 1,100 combined yards of offense.

Previous Post: « Chargers bolt past Chiefs
Next Post: No answer, yet, to pending drop in transportation funding »