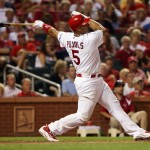 St. Louis Cardinals first baseman Albert Pujols has won his third MVP award. It was a clean sweep of first place votes. This is Pujols’ third MVP having won last year and in 2005. He is the second Cardinal to win three MVPs prior to his 30th birthday. The other was Stan ‘The Man’ Musial. Barry Bonds also won three before 30. Bonds won a total of seven MVPs.

Pujols was followed by Hanley Ramirez of Florida who had 15 second place votes. Ryan Howard, a native of St. Louis and former Missouri State Bear was third, followed by Prince Fielder of Milwaukee who was fourth. 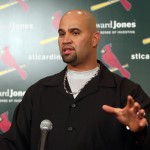