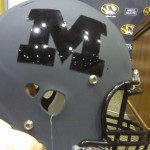 On Saturday, the Missouri football team will take on Kansas at Arrowhead Stadium and they’ll be wearing Nike’s new Pro Combat uniform. The uniforms you will see on Saturday are a one time deal…thankfully.

Don Barnes, the Missouri equipment manager said that Nike got their design idea from incorporating the stealth bombers are Whiteman Airforce base.  Listen to Don’s comments on the inspiration for the design Don comments on the inspiration for the design I like the grey helmet, but there is not a lot of gold in the uniform. I’ll hold out my final thoughts on the look until I see them on the field, but I’m thinking they look a little drab. 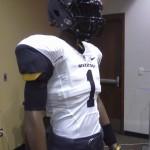 Actually, when I first looked at them, I immediately thought they looked a lot like the Seattle Seahawks road jerseys with obviously different colors.  Or maybe a bit of Robocop with all that grey.  However, the technology behind the uniforms are newly created. The uniforms themselves will be lighter in weight and are built to add more protection to the player.

The Pro Combat uniform has padding zones in the shorts that cover the thighs, hips, and tailbone. The padding zones are made of foam cells that absorb, deflect and disperse the impact of on-field collisions.

There is a lot of technology that goes into the design of the uniforms, and you can get more by going to Nike.