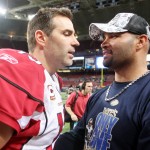 What was it about visiting quarterbacks to Missouri this weekend in the NFL. First, Big Ben in KC took a knock on the head and he had to leave the Pittsburgh-Chiefs game. Then Kurt Warner left the Arizona-Rams game in the second half. By then the damage was too much for the Rams to come back from as they lose 21-13.

The Cardinals are 5-0 on the road and jumped out to a big lead early. After the Rams got on the board on their opening drive of the game on a 40 yard field go from Josh Brown, Warner threw touchdown passes to Anquan Boldin and Larry Fitzgerald and Beanie Wells scored on a one yard run to make it a 21-3 half time lead.

Warner would 15 of 19 for 203 yards and two touchdowns. The Rams climbed back into the game with another Brown field goal from 20 yards after the Rams were unable to score deep in Arizona territory. 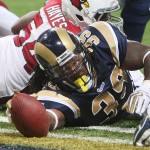 Then in the fourth quarter, Steven Jackson scored on a one yard run with 7:08 to play in the game to make it 21-13. The Rams held Arizona down with Matt Leinart at QB and got the ball down to the Cardinals’ seven yard line with under four minutes to play. Instead of taking a field goal and cutting the game to five with three timeouts and the two minute warning, head coach Steve Spangnuolo decided to go for it on fourth down and Marc Bulger’s pass to Donnie Avery was incomplete.