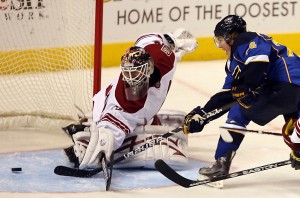 T.J. Oshie’s third period goal rallied the Blues to tie the game against the Coyotes which set up Blues defensemen Erik Johnson’s overtime goal and a 3-2 win. Johnson rushed the puck up the ice from the Blues end and fired a shot past Phoenix goalie Ilya Bryzgalov 17 seconds into overtime to give the Blues a 3-2 win.

The first pick in the 2006 NHL entry draft said after the game, “It felt great. Any time you score a goal it feels good, but to win a game against a good team like Phoenix, it feels even better.” The win was the first for St. Louis in five overtimes (1-4) this season and the first loss for Phoenix (4-1) in five extra sessions.