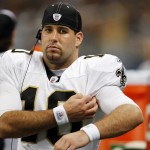 Earlier in the summer I picked Zack Greinke and Chris Carpenter to win the Cy Young Award. Steve Walsh, who works on the news side of picked Tim Lincecum on the NL side.  He bombed on C.C. for the AL, but anyway we kick around the results and decide if Adam Wainwright and Chris Carpenter got a raw deal.

We also take a couple of shots at our collegue Brent Martin (who was unable to make it on this podcast due to a domestic emergency…nothing serious) who is a homer for the Royals so he went with Grienke.  I thought he may have had the sweep since he picked Wainwright, but none of us could pick both winners. 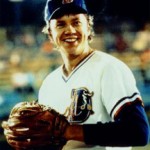 I also take exception to Chase Daniel, now the third string quarterback on New Orleans for the lame interviews he gives. I’m calling him the new “Nuke” Laloosh. Remember him from Bull Durham?

Anyway, Steve asked him some great questions after the Rams-Saints game and he gave lame answers. I’ve got the interview on this week’s Pressbox Podcast.

Listen to the Pressbox Podcast