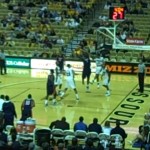 The Missouri Tigers won their season opener against UT-Martin 83-68. Laurence Bowers led the Tigers with 16 points off the bench, 14 of those coming in the first half. Keith Ramsey added 15 and Marcus Denmon had 10. In all, 11 players scored for the Tigers. JT Tiller left the game with a sprained foot.

UT-Martin grabbed a 9-8 lead four minutes into the game, but the Tigers went on a 6-0 run and then built their lead to 22-15 with 11:50 to play. Freshmen Michael Dixon hit a three pointer with just under 10 minutes to go in the first half for Mizzou’s first double digit lead of the game. Mizzou’s biggest lead of the half came at the end when the Tigers were up by 15, 50-33 at the break. Bowers was 5 of 6 from the floor and 4 of 4 from the line while pulling in four rebounds, three on the offensive side to go along with his 14 points in 13 minutes of play. Mizzou shot 50% from the field in the first half while forcing UT-Martin into 14 turnovers. The Skyhawks shot the ball well, 40% from the floor and 38% from three.

Early in the second JT Tiller went down when one of the Skyhawks landed on his foot. Tiller had to be helped to the bench. He sat the rest of the game with Mizzou well in control, but head coach Mike Anderson said he has a sprained foot and they’ll know more on Wednesday. Bowers brought the sparse crowd to their feet with a jam with just over 12 minutes to play which made the score 67-47.

Anderson called Tiller the heart and soul of the team and said the team plays different when Tiller is not on the floor. If Tiller is out for any length of time, there will need to be some quick learning on the fly from some of the young guys who will need to try to pick up slack for the John Wooden Award qualifier.

Previous Post: « Watching for wasting in deer
Next Post: Alyssa Bustamante, 15, to be tried as adult in Olten murder case in Cole County »