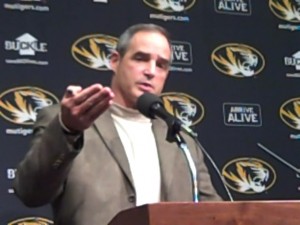 No surprise here following the Tigers 38-12 win over Kansas State that Danario Alexander would be named the Big 12’s offensive player of the week. He had 200 yards receiving and three touchdowns in the win, plus his 80 yard catch and run for a score in the third quarter broke Mizzou’s scoring drought in the second half of Big 12 games.  Click on the pic to listen to Pinkel’s comments on Danario

Gabbert completed 10 other passes in the game for just 98 yards as he went 20 for 27 for 298 yards and three TDs. In his last two games, Alexander has 414 yards receiving. He hooked up with Blaine Gabbert on scoring plays of 54, 16 and 80 yards.

Alexander stopped what was shaping up to be another second half collapse. Mizzou led 17-6 at the half, but K-State controlled the third quarter and kicked two field goals to pull to within 17-12. That momentum was quickly erased when Alexander caught a pass near midfield, put a move on one defender and then outran three other for the corner of the end zone. From there, it looked like all the pressure was off the Tigers who then piled on two more touchdowns and stopped the Wildcats four times on a fourth and goal late in the game.