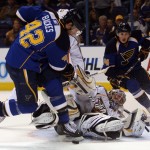 Jordin Tootoo scored on a wrist shot with 3:43 left to give the Predators a 3-1 victory over the St. Louis Blues on Thursday night. It was Tootoo’s first goal of the year and the loss was tough on Blues’ coach Andy Murray.

After the game Murray said, “I’ve had a lot of losses as a coach, and that ranks right up there because of the way we played.” The Blues were held to just 22 shots ending a streak of six games in which they had 30 or more. Meanwhile the Preds peppered Blues’ goalie Chris Mason who say 31 shots in the first two periods. He was named the number one star of the game despite the loss. This was Mason’s first loss in five games against his former team.

Tootoo, flipped a loose puck toward the net right before center T.J. Oshie leveled him. The shot slipped by Mason, who was screened. Patric Hornqvist also scored for Nashville, and David Legwand added an empty-netter. The Blues, looking for their first back to back wins since they started the season with two wins over Detroit in Sweden, scored 2:03 into the game but were shut down the final 57:57 of the game.