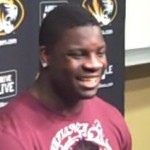 Next Saturday, when the Missouri Tigers play Iowa State in Mizzou’s final home game of 2009, and you chant “SPOOOON” after senior linebacker Sean Weatherspoon makes a tackle, remember to thank Steve and Barry. Who? Yeah, you know the sweatshirt guys? See, right after Sean made his only visit to Missouri, he was walking around the mall with his friends just outside his hometown of Jasper, Texas and went into a Steve and Barry’s sporting goods store. There, in the middle of southeastern Texas was one lone Missouri sweatshirt on the rack. Sean laughed looking back on the moment, finding it strange, like it was some kind of sign for him to come to Missouri.

Sean did take notice of the sweatshirt, but seriously, that first night back at home, he said he watched Kansas beat Houston, who he gave a verbal commitment to, and had a change of heart. He called then defensive coordinator Matt Eberflus who recruited Sean and told him he was coming to Missouri.

I hope you can take 15 minutes of your time to check out my visit with Sean Weatherspoon. For me, when I see him around Mizzou on media days, he’s always gracious, has a smile on his face. Yet, there is also no other player that I would fear more than Weatherspoon. When he makes a hit and bounces up and shakes his body in excitement, it has to send fear into some of his opponents. I don’t know if it’s the whole shield thing he wears over his facemask or what, but I remember seeing him in the Cotton Bowl and that day he was the fastest player on the field and he was hitting everything in sight. May I remind you, Arkansas had Darren McFadden who was no slouch of a speedster. Spoon is fast, big, and he can be mean. So, he takes us inside the locker room before a game to tell us how he gets prepared and what he listens to on his ipod. You may be surprised.

Get to know the senior linebacker and how he wrestled with the decision about going pro after his junior year. Thanks for listening and thanks to Sean Weatherspooon.