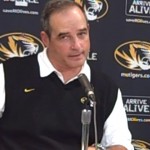 I’ve heard it before. My late father-in-law used it plenty of times. Maybe once or twice on me in fact. When he called someone “pal,” it wasn’t a term of endearment. When Missouri Head Coach Gary Pinkel pulled out the “pal” on me, I felt his frustration, but the question had to be asked.  What post game video, by clicking on the photo.

Forget the fact that Baylor put up the most passing yards in school history when freshmen Nick Florence threw for 427 yards. I wanted to know about the Missouri offense. They’ve yet to score a touchdown in the second half in Big 12 play following Mizzou’s 40-32 loss to Baylor.

After racking up 347 yards in the first half and 27 points, the Tigers managed a field goal, a safety and gained just 131 yards in the second half.

I asked Pinkel if he had any idea why his team was struggling in the second half of football games and he responded, “If I had the answer to that pal…” That was it. I asked it, the question was out there and he leveled me with the raised brow and threw in a pal.

He went on to say that if he knew the answer he would have had it fixed by now. I’m not sure what the problems are with Missouri’s offense. They’ll come out and play gang busters in the first half as they have the last two weeks, then get shut down. Is it mental toughness or lack thereof? The Tigers were flagged seven times, but Baylor commiteted eight penalties. I think mental toughness is part of it. There was one point in the second half where Missouri receivers dropped three passes. Difficult passes maybe, because there was traffic, but passes that were right in their hands. In particular Jared Perry. On a key third and long when Mizzou was trailing in the fourth, Blaine Gabbert threaded the needle and hit Perry for what would have been a first down, but Perry dropped the ball. The ball was up a bit and Perry had to reach up, but it looked like he pulled his hands in after hearing footsteps. It’s happended several times this year with Perry. Remember the Wes Kemp drop at OSU? Same thing, too many dropped passes. Guys not willing to sacrifice their bodies.

I think inexperience comes into play as well. Guys like Austin Wuebbels continue to get beat on the offensive line. In the second half, Gabbert was scrambling for his life back, and there were times he should have took off to run, but instead tried to be too perfect with passes.

I’ve said this over and over this season, but lack of pass protection, and the inability to make tough catches, has been happening since the first scrimmage in August. Did this group of players come into this season thinking that they were deserving of another Big 12 North title, and didn’t put the work it? I’ve listened to the players this whole season, there has been this attitude that this team has had plenty of time to rebound…get things turned around. Even after 0-3, there was this thought that Missouri would just come in and win these final five games and be sitting pretty. If not in it for the Big 12 North, then certainly a decent bowl.

Well, after nine games of hearing the same song and dance, I not too certain they’ll even hang with K-State and I’m not ready to say Iowa State or Kansas are sure wins. One thing is certain. This team has struggled and will continue to struggle, because the sense of urgency or the need to prove themselves was left behind at the dome in St. Louis.

Listen to Gary Pinkel’s postgame comments from the Baylor game