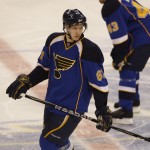 Lars Eller, just called from Peoria made his NHL debut and came up big for the Blues, but Calgary Flames’ Dion Phaneuf scored 2:50 into overtime to give the Flames a 2-1 victory over the St. Louis Blues on Thursday night. This is Calgary’s eighth win in nine games.

The Blues were firing shots at Miika Kiprusoff, but the Calgary goalie turned aside 30 shots. The Blues went over two games and two periods without scoring a goal, but ended the drought and snapped an 0 for 26 power play drought when rookie Lars Eller scored his first NHL goal in the third to tie the game at 1-1. Eller is the 12th St. Louis player to score in his debut. The goal snapped the Blues’ scoreless string at 171 minutes, 5 seconds. St. Louis has lost six of seven games at home, scoring only eight goals at “The Scott” this season.

Phaneuf’s shot bounced off the shin guard of St. Louis winger T.J. Oshie and past goalie Chris Mason for his sixth goal. Jarome Iginla, who just kills the Blues picked up his seventh goal of the year in the first period.