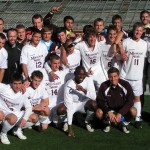 The 22nd-ranked Missouri State men’s soccer team (12-3-2, 7-1-1) clinched the Missouri Valley Conference regular season title with a 1-0 win over Evansville at Plaster Field Wednesday afternoon. It is the third regular season title for the Bears, having won it in 1999 and 1997. The win is the Bears seventh straight, the longest winning streak since 2004.

Sophomore Jordan Hoffman tallied his third goal of the season on a header in the 82nd minute to put the Bears ahead. Johannes Demarzi registered his conference-leading 10th assist of the season as his corner kick found Hoffman open on the back post. Only three other players in the nation have more assists than Demarzi.

Missouri State will travel to Charleston, Ill., to play Eastern Illinois on Saturday at 2:00 p.m. in the regular season finale. The Bears will then play in the semifinals of the MVC Tournament next Friday, November 13, in Des Moines, Iowa. The Bears opponent and match time for the tournament are yet to be determined.