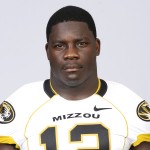 Missouri senior linebacker Sean Weatherspoon has been named the Lott Trophy IMPACT Player of the Week, for his game high 12 tackles in Mizzou’s 36-17 win at Colorado. Weatherspoon led the Tigers as they held Colorado to negative-14 yards rushing overall, and just 176 yards of total offense in the win.

Weatherspoon, a Lott Trophy quarter-finalist the past two years who was an Associated Press 3rd-Team All-American in 2008, now has 73 tackles on the season to lead the team and 375 in his career, which is currently 5th-best on the school career chart. Missouri will receive $1,000 for its general scholarship fund in recognition of Weatherspoon’s award.

On Monday, Weatherspoon talked about getting that first big win and how he knows Baylor will be coming after Mizzou this weekend.