The first Youth Deer Hunt of the season saw hundreds of Missouri’s young hunters take to the woods over the weekend. The Missouri Department of Conservation has several programs in place to encourage youngsters to hunt safely. 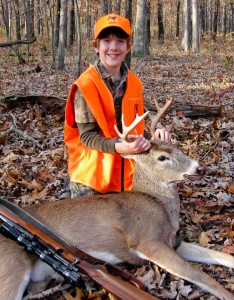 A young Missouri sportsman takes advantage of the state's twice yearly youth deer hunt, only open to kids 6 to 15. (Photo courtesy of Missouri Department of Conservation)

Brian Flowers is an outdoors specialist who heads up hunter education courses for the Department of Conservation. He says there are several opportunities for kids to learn how to hunt safely.

Each region has its own programs and the department teaches hunter safety education throughout the state, in every county, he says.

Flowers says hunting is important to the state for several reasons. Billions of dollars are spent on hunting every year, it keeps the herd numbers down to a managable level, and it has a big impact on a child’s future. It teaches them respect for firearms, makes them responsible hunters in the field and shows them an appreciation for nature, resources and conservation, he says. That’s something they’ll pass on to their children and grandchildren.

Flowers says for more information about hunting programs in your area, call your regional Department of Conservation office.

Hundreds of Missouri kids headed into the woods over the weekend for the Youth Deer Hunt. Those who missed it will have another chance to try to bag a deer January second and third.

About 10,000 deer were harvested during last year’s youth deer hunts.

For more on the hunting programs, call any regional office, or visit mdc.mo.gov.