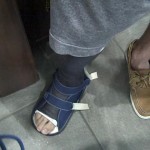 Missouri quarterback Blaine Gabbert was all smiles Monday afternoon answering questions about his ankle. Gabbert has been banged up since the Nebraska game and no matter how you look at it, the Missouri offense has struggled in every game since. Gabbert says it’s getting better every week. Head coach Gary Pinkel says he doesn’t expect this to be a nagging injury, but why the cast?

Gabbert says the walking boot is purely for precautionary reasons, yet I can’t help but think the ankle is injured more than he’s letting on. Gabbert had to be helped off the field against Texas in the second half and never returned. Pinkel said if it was a close game, he would have been able to go back in there. It also happened in the OSU game where he came up hobbling.

My question is so what if it is?

For example, Roy Helu of Nebraska is the second leading rusher in the Big 12. He had a shoulder stinger and fumbled twice on five carries. When asked, coaches said his injury was not an issue. Then, I question, why was the second best back in the Big 12 given the ball just five times? I’m sure Iowa State knew that Helu sat out practices earlier in the week, I’m sure they targeted his shoulder. In Missouri’s case, if an opponent looks at game film, they’ll notice Gabbert is not moving around as well as he did earlier in the year and they’ll also notice he’s not scrambling as much. So the bigger question becomes, is Missouri concerned that Gabbert will not be able to go this weekend?

Gabbert says the cast is coming off today and he’ll practice Tuesday and Wednesday. The team has a rule…no practice, no play. Gabbert is gutsy and I’m sure he’ll give it a go, but how effective will he be?