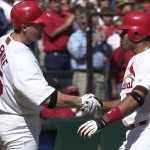 The St. Louis Cardinals announced that manager Tony LaRussa will return for a 15th year with the team after agreeing to a one year deal.  LaRussa said the support of the front office and the fans helped fuel his fire to return to manage this team.

LaRussa also introduced Mark McGwire as the team’s new hitting coach.  Tony said that this had nothing to do with the job Hal McRae did or didn’t do.  He said McGwire has an extreme talent for teaching hitters.  LaRussa also said he knows he doesn’t have much time left at managing in the game, and he wanted to give McGwire an opportunity to coach.

Pitching coach Dave Duncan will also return with LaRussa as well as the other bench coaches.  LaRussa is 65 years old and is third on the all-time managers list for career wins behind Connie Mack and John McGraw.

McGwire was not in St. Louis, but will meet with the media at a later date.