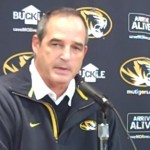 There was no letdown, no overlooking the Missouri Tigers. The 3rd ranked Texas Longhorns came out swinging and once again dominated Mizzou early coming up with a 41-7 win on Missouri’s homecoming Saturday night at Faurot Field in front of 71,004 fans.  Watch Gary Pinkel’s opening comments by clicking on the photo.

If it appeared to you as though the Tigers quit and didn’t put their best effort forward, you were right.  After the game, Mizzou head coach Gary Pinkel said, “I can’t tell you how disappointed I am in this football team.  It’s a pivotal point in the season.  It doesn’t take a rocket scientist to figure that out.  The sense of urgency has to be here.”

The Longhorns struck quick scoring three times in the first quarter putting together scoring drives of 61, 62, and 62 yards. Heisman candidate Colt McCoy threw two touchdown passes in the opening quarter. The first was an eight yard pass to Jordan Shipley. The second came when John Chiles snuck past the secondary for a 34 yard pass. 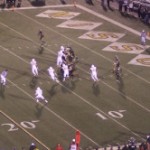 Mizzou struggled to get anything going offensively holding the ball for just 4:04 in the first quarter. The Tigers were outgained 170 to 19 in the opening quarter. A bright spot for the Tigers came up with one scoring drive, that got started with a 22 yard run from freshmen Kendial Lawrence. That gave the Tigers a little bit of momentum as Mizzou got into Texas territory for the first time five minutes into the second quarter. On a third and three from the UT 40, Lawrence busted through the line for a six yard gain, getting tripped up… otherwise he was gone. The Tiger line was moving the Texas defense back off the line. Two plays later, Derrick Washington peeled off a 12 yard run as Mizzou got into the red zone. Gabbert hit Jared Perry for an 11 yard touchdown pass capping off an impressive 12 play, 81 yard drive.

Blaine Gabbert left the game in the third quarter after hurting his ankle on a sack. He finished 8 of 16 for just 84 yards with one touchdown. Jimmy Costello came in to finish the game up. McCoy finished 26 of 31 for 269 yards and three touchdowns in three quarters of work.

Missouri is now 0-3 in the Big 12 and they’ve gotten through the tough part of their schedule, but with five games remaining, the time has come to put up or shut up.  Pinkel said, “We’ve run out of time…there’s no time left.  I can’t be more blunt than that.”

Previous Post: « Chiefs strong armed by SD’s Rivers
Next Post: LaRussa will return with Big Mac as a coach »