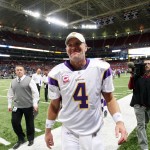 On a day the Rams wore throw back jerseys from 1999, Brett Favre looked like an old throw back of himself. A day after he turned 40, he threw for 232 yards and touchdown and the Rams got pounded by the Minnesota Vikings 38-10 to fall to 0-5. It was the Rams’ 15th straight loss.

For Chief Jared Allen recovered two fumbles, one a 52 yard touchdown and Adrian Peterson ran for two more scores. Allen’s touchdown came when Kyle Boller lost a grip on the ball on the Rams’ fourth offensive play of the game. The Rams look pathetic.

Down 14-0 after that the Rams composed themselves long enough to get down to the Minnesota five, only to have Boller and Steven Jackson fumble an exchange and once again the ball was recovered by Allen.

The Rams got down to the Vikes 10 yard line after a Favre interception, but the Lambs fumbled the ball again at the two after tight end Daniel Fells got popped from behind. In the fourth quarter Boller was picked off again after getting down to the nine.

Boller finished 20 for 31 for 209 yards and missed most of the fourth quarter after getting rocked on a hit in the third quarter. Marc Bulger came in to clean up the mess and hit Donnie Avery with a 27 yard touchdown late in the game.