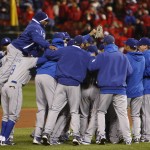 They say the playoffs in baseball are all about who gets hot at the right time. This year, it was the Los Angeles Dodgers. Behind a four hit shutout through seven innings from Vicente Padilla and clutch hitting from Andre Ethier and Manny Ramirez, the Dodgers sweep the Cardinals with a 5-1 win at Busch Stadium.  Tony LaRussa’s brief comments

There was plenty of blame to go around from the Cardinals’ standpoint as each player to a man took responsibility for this huge postseason collapse. Joel Pineiro Listen to Joel Pineiro got tagged with the loss as he gave up four runs in just four innings as Tony LaRussa pulled Pineiro as the team got desperate to try to start something. The Dodgers wasted little time as Manny Ramirez doubled in Matt Kemp who reached on a infield single. Manny laced two doubles and a single while driving in two runs. L.A. was clutch all series and continued that trend tonight as all five of the Dodgers’ run scored with two outs.

In the third Andre Ethier provided a cushion for Padilla by launching a two run homer over the Cardinals’ bullpen in the third to put L.A. up 3-0. Ethier finished hitting .500 for the series with a double, triple and homer in this game and four runs scored in the series.

The Cardinals had a chance to jump on Padilla, but left the bases loaded in the first. Padilla, who hasn’t pitched past the sixth inning since July 17th, a string of 10 starts, cruised along through seven innings where he allowed just four hits. At two different points, Padilla retired eight and nine batters in a row.

In the middle innings, Dennys Reyes and John Smoltz combined to strike out seven of nine outs, but the Dodgers delivered the final blow when they added a run in the seventh off Smoltz. The Cardinals scored their lone run in the eighth when Pujols hit an RBI single to right off Dodgers’ closer Jonathan Broxton. It was Pujols’ only RBI of the post season.

Matt Holliday was cheered loudly when he made his first put out in left field and the first time he came up to bat, but Holliday had a disappointing post-season finishing with a .167 average. It was a tough way to finish for a guy who carried the team in the second half, because it was apparent Joe Torre was willing to let Holliday be the guy to beat them after they cautiously pitched to Albert Pujols the whole series.  Matt Holliday’s postgame comments

Mark DeRosa, who has now lost 10 straight playoff games, said that Holliday will long be remembered for his gaffe in game two, but without him, the Cardinals wouldn’t be in this position.
Mark DeRosa on Holliday and the series

The question now for the Cardinals’ front office is, guys like Holliday and DeRosa apart of the 2010 plans?  On missourinet.com, my exclusive interview with GM John Mozeliak will be posted soon.

Previous Post: « Griffons win on the road at Truman
Next Post: Cards’ GM will have little rest before looking ahead »