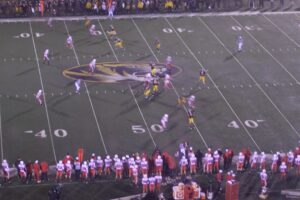 It was a strange night all around Thursday night at Faurot Field in Columbia. The lights in the stadium went out about 90 minutes before kickoff. The lights came back on, but the main scoreboard did not work. For three quarters, nothing was working for the Nebraska Cornhuskers either. Then, much like the lights flicked back on 30 minutes before kickoff, the light clicked on for the Huskers as they rallied in the fourth quarter with 27 unanswered points to beat Missouri 27-12.

The Husker offense just couldn’t generate anything in the third quarter. NU picked up just two first downs and gained just 10 yards in the third. After three quarters, they had 109 yards of total offense. In the fourth, Lee hit Niles Paul for a 56 yard touchdown pass on a 3rd and 8 and just like that, Nebraska was within 12-7 with 13:56 to play.

Then, on Missouri’s first pass on the next possession, Ndamukong Suh picked off a pass thrown right into his chest giving the Huskers 1st and 10 at the MU 20. Two plays later, Lee found Paul for a 13 yard touchdown as Paul ripped the ball away from cornerback Kevin Rutland. The Huskers, prior to that interception, had four or five passes that were in their hands that could have been picked off, but they were all dropped.

On Missouri’s next possession, Gabbert was picked off by Dejon Gomes at midfield and he raced down to the 10. Three plays later, Lee avoided a sack by getting rid of the ball just as he was hit. Missouri native Mike McNeil caught the short pass and went in untouched for an 8 yard TD. In just over three minutes the Huskers had 21 points on the board and control of the game.

NU finished things off late running down the clock as Hule scored on a five yard run after busting off a 41 yarder moments before that. In the fourth quarter, Lee was 5 of 6 for 81 yards and three touchdowns. For the first three quarters, Lee was just 9 of 27 for 79 yards.

Missouri had opportunities to blow this game open in those first three quarters, but penalties once again slowed the offense. Special teams was nearly detrimental to the Huskers. They muffed two punts, had another punt bounce of Matthew May that was recovered by the Tigers and Alex Henery was called for a safety after bobbling a high snap in the end zone. The big special teams play came in the final minute of the second quarter when Carl Gettis returned a short Henery punt 27 yards to the NU 29. A personal foul penalty (one of four against Mizzou) backed the Tigers up to the NU 44. Blaine Gabbert drove the Tigers inside the five and on third and goal from three, Derrick Washington was stopped at the one. It appeared as though the Tigers would kick the field goal, but Gary Pinkel had a change of heart and decided to go for the touchdown. His hunch paid off as Gabbert took it from yard out to go into the half up 9-0.

Kicker Grant Ressel missed a 43 yard field goal, his first miss of the year after the Tigers were given a short field to work with after Lee fumbled while trying to fall on the ball after a bad snap. The Tigers had good field position at the NU 29, but failed to do much. Ressel would later hit a 33 yard field goal with 2:16 to play to put Missouri up 12-0 and close in on what should have been their fourth win in a row over the Huskers in Columbia.