Nixon Administration officials attempt to explain why contamination at the Lake of the Ozarks wasn’t reported promptly even as the governor orders an investigation of the Department of Natural Resources. 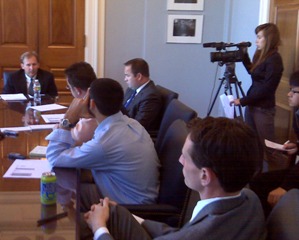 Officials within the Nixon Administration denied they knew about contamination at the Lake of the Ozarks until a month after readings were taken. Then a transcript of an interview with former DNR spokeswoman Susanne Medley became public, revealing she had told top Nixon aide Jeff Mazur about elevated E. coli levels early on.

Mazur says he didn’t pass the information along to others in Nixon’s office.

"I did not," Mazur tells reporters both gathered in the governor’s office and on a conference call. "I didn’t feel as though I had anything to share. I didn’t have any numbers. I didn’t have any paper. I didn’t have tangible results. It was made clear to me that these were results on which there wasn’t sufficient information for any conclusions to be drawn."

Mazur terms the Medley meeting on May 29th a "heads up" and claims he didn’t actually see results until four weeks later.

"She gave me a heads up that they had initial results," Mazur explains. "This was in late May, May 29th, May 28th. I saw the release, it must have been June 24th or 25th, I can’t remember which date it was. It was the day before the release ultimately was issued."

The Springfield News-Leader reported earlier that Medley revealed her discussion with Mazur to the staff of a Senate committee reviewing the DNR’s decision to delay release of the contamination report. The newspaper obtained a transcript through a Sunshine Law request. Medley resigned just prior to talking with committee staff. In the interview, Medley said she told Mazur about the elevated E. coli levels during a telephone conversation and supplied periodic updates about the test results to Mazur. The Kansas City Star also reported on the interview.

Governor Nixon complains that DNR gave him faulty information. Nixon has ordered an investigation of the department and has suspended DNR Director Mark Templeton, a suspension Templeton accepts.

"I said that I passed the information from people in my department to the governor’s office," Templeton says. "Accountability is appropriate."

Deputy DNR Director Bill Bryan has been appointed acting director. Nixon has asked him and Department of Corrections Inspector General Chris Pickering to conduct a thorough investigation and to punish those responsible. Department of Insurance spokesman Travis Ford has been assigned duties as DNR communications director in the interim.