Senator Christopher "Kit" Bond is now an author, having co-written a book on the importance of America working with Muslims in Southeast Asia. Bond, who has spent a good deal of time talking with elected officials and others in that part of the world, appeared on CSPAN to promote "The Next Front: Southeast Asia & the Road to Global Peace with Islam," which is co-authored by Lewis Simons. 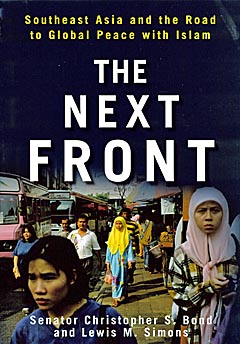 Bond says it is important to spread America’s influence in Indonesia and other Muslim areas of Southeast Asia through business opportunities – not through force.

"Smart power is the only way to reach out to Muslim countries, to convince them that the United States is not their enemy, to show them that we want to work with them on a broad range of issues, creating more jobs, building schools, teaching them, providing them better means in agriculture and providing investments that will help their economies grow and get people employed," said Bond during his CSPAN interview.

Bond is convinced that opening doors to economic prosperity holds the key to convincing Southeast Asian Muslims that America wants to be a friend. He says the use of military force doesn’t really work.

"We would rather be putting American volunteers and tourists and business people into those countries," said Bond

He’s convinced thriving economies help ensure that terrorists don’t get a foothold, but he realizes many Muslims view the United States in a negative light because of this country’s support for Israel.

"The Israel-Palestinian issue remains a very, very hot issue for many people throughout the Muslim world." said Bond, who insists America must get to know and work with mainstream Muslims.

Bond says that while the United States must help countries fighting radical Islam, there is no substitute to encouraging private American investment.

"We also need to make sure they have good jobs, they have productive agriculture, they have opportunities to study in the United States and American students have the opportunity to study at schools and universities in their countries," said Bond.

The Middle East has long been considered the front line for the war on terror, but Bond and his co-author warn the new front is in Southeast Asia, which is home to the world’s largest concentration of Muslims.