Any thoughts that State Senator Chuck Purgason (R-Caulfield) might pull out of the Republican nomination for the U.S. Senate seat being vacated by Senator Christopher “Kit” Bond were quickly quashed on Thursday as Purgason held a news conference, at the State Capitol, to announce his intention to go after frontrunner and party favorite – 7th Congressional District Congessman Roy Blunt (R-MO7). 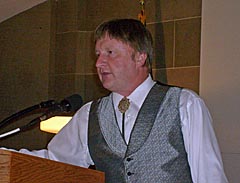 Purgason sees Blunt, who was a member of the Republican leadership when the GOP controlled the U.S. House of Representatives, as a contributor to the economic and other problems we are experiencing today.

He believes the failure to control spending is one of the reasons American voters opted for big changes in the U.S. House and U.S. Senate in 2006. And, Purgason fears Roy Blunt moving from the House to the Senate would not really solve any of the problems.

“If we continue to send people that become part of the problem, rather than the solution, that constantly deficit spend, we shouldn’t be surprised when our deficits continue to grow.

Purgason has no intention of getting out of the race and has not been asked to step aside.

“I’ll be honest with you,” said Purgason. “The party has not talked to me about getting out.”

In fact, Purgason claims he has not had a chance to sit down and talk to Blunt about some of the major issues confronting the country and the Republican Party and to ask Blunt why he didn’t do more when Republicans controlled Congress.

“What is wrong with asking the question of someone that was in leadership, ‘What happened during this time period?'”

Purgason says Blunt and other members of the Republican leadership in Washington failed to stand on conservative principles and were voted out of office. He would like to talk to Blunt to ask, “What happened, Roy?” But has not formally asked for a get-together with the Congressman.