Governor Jay Nixon has announced an initiative aimed at improving water quality at the Lake of the Ozarks. It’s an initiative that includes a comprehensive study of contaminants of the lake. 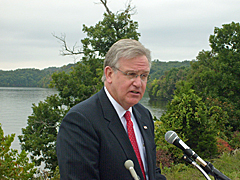 "Ensuring the long-term sustainability of the Lake of the Ozarks is a challenge that falls to us here and now to guarantee that this resource remains for generations to follow," said Nixon as he was flanked by Department of Natural Resources Director Mark Templeton at a Wednesday afternoon news conference at the Pa He Tsi Boat Launch at Lake of the Ozarks State Park.

With that, Nixon announced a four-part plan to clean up the Lake of the Ozarks, which begins with the inspection sweep of about 400 area facilities that hold current wastewater permits close to the Lake of the Ozarks of major tributaries. The Governor promises a zero-tolerance standard for permit violations will be applied. 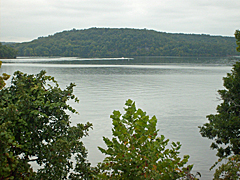 The next step is a zero-tolerance policy regarding the pollution of the lake with contaminants. Step will see the Department of Natural Resources completing the baseline survey of water quality at the lake, testing all relevant contaminants. Finally, DNR will institute a strict standard for authorizing any additional wastewater discharge permits around the lake.

"These actions will help us move water quality here at the lake in the right direction," said Nixon. "I have ordered the DNR to start implementing these policies immediately."

As for why this effort is being launched now, Nixon makes it clear the closing of Lake of the Ozark beaches this summer is reason enough.

"Having to close beaches in a state park is a dramatic occurrence that happened not once, but twice, this summer and certainly that focused my attention on this particular resource," said Nixon. "I would hope, and I think it’s well within our power, to accomplish that that never happens again here."

Asked why the public should have confidence in the government given the fact that information on this summer’s E.coli contamination at the Lake of the Ozarks was withheld from the public for a period of time, Nixon vows to take the bull by the horns.

"We’ve laid out a very, very clear path here of what we are going to do using the full force and power of the Department of Natural Resources and the Governor’s Office to make sure that we get on a path that gives us the baseline information that the public will be able to see.that lays out a clear plan to improve the water quality of this resource. We’re gonna do that … I’m gonna do it … We’re gonna do it … It’s gonna happen."

Nixon expects the results of the DNR study to be delivered to his desk by December 31st of this year.

Download/Listen: Governor’s news conference at Lake of the Ozarks (27:00 MP3)

Previous Post: « Skelton urges Obama to commit resources to Afghanistan
Next Post: Bond and McCaskill at odds over whether Obama supports war in Afghanistan »