We have two House Speakers-elect, one Republican and one Democrat, hoping to replace Speaker Ron Richard , a Republican from Joplin. Who actually becomes Speaker depends on which party wins the majority in the 2010 elections. 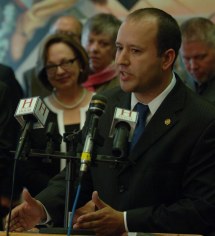 Rep. Mike Talboy , a Democrat from Kansas City, speaks with confidence when assessing the chance that Democrats could break through next year and re-capture the majority in the House, reversing Republican gains that gave them the majority in 2002.

Though Democrats swept into power in Washington, D. C. in the 2008 elections, they failed to win back either chamber of the General Assembly in Jefferson City. Democrat Jay Nixon won as governor, but Republicans maintained their majorities in the House and Senate. In the House, Republicans hold 88 seats in the Missouri House. Democrats hold 73. There are two vacancies.

House Democrats have chosen Talboy as Speaker-elect, but House Republicans like the status quo. 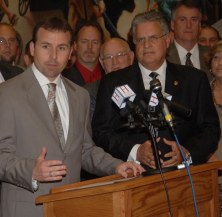 Tilley has been chosen Speaker-elect by his fellow Republicans. Tilley expects Republicans to keep the majority, which will make him Speaker.

"The citizens of this state have felt, overwhelmingly, that they want a Republican majority,

because we hold the line on taxes, we invest in education, we encourage economic growth and development," Tilley says. "So, it’s nothing that’s going to be magical. Our job is to do a good job here in the Capitol on behalf of the citizens and let the citizens decide who the next Speaker is"

Tilley and Talboy agree on one thing: the key to the elections next year is candidates. Both are in charge of recruiting the best candidates for their respective parties. There will be 54 open seats in the 2010 state representative races, seats in which the incumbent is forced out due to term limits. Republicans hold 35 of those seats with Democrats holding 19.

Tilley claims that of the 163 seats in the House, 40% are secure Republican seats and 40% are secure Democratic seats. He says that leaves the battle focused on 20% of the seats, which he says are truly up for grabs next year.