It was worth a shot.  Matt Holliday slid hard into Cubs shortstop Ryan Theriot who threw the ball wide of first base.  Ryan Ludwick was safe at first and it appeared the Cardinals won again in the ninth inning on Sunday.  But hold on. 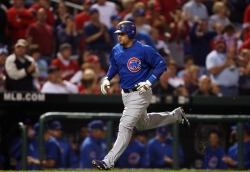 Runner interference was called on Holliday who slid out of the baseline, which was the correct call.  The play turned into a double play to end the inning.  In the 11 th , Jake Fox of the Cubs hit a two run homer and they added another to win 6-3 and keep St. Louis’ magic number at four. (photo by Bill Greenblatt, UPI)

All year the Cardinals fight in every game and last night it was more of the same.  After Holliday got hit by a pitch in the eighth, he scored on a wild pitch from Kevin Gregg to tie the game at 3-3.

Adam Wainwright had yet another solid outing, but got another no decision.  The numbers for Wainwright are amazing.  According to stlcardinals.com,  Wainwright is 13-5 with three no-decisions in 21 starts since May 31, but has given up two earned runs or fewer in all eight of his winless starts. The righty has lost games by scores of 2-1, 2-0, 3-2 and 1-0 and got a no-decision when he allowed one run in nine innings in a 2-1 Cardinals win on July 1 against San Francisco.   The Cy Young hopeful is 18-8 with a 2.59 ERA with two regular-season starts remaining but should have a much better win-loss record than his stats show.

The Cardinals will now clinch the Central Division on the road.  They play at Houston for three, then a weekend series in Colorado where the Rockies lead the NL wild card.