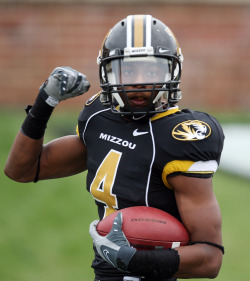 After a slow start by the MU offense, the Tigers got going with the help of a little bit of trickery and it was all downhill running from there as the Missouri Tigers move to 3-0 on the season following their 52-12 win over the Furman Palidans. (Photo courtesy of Bill Greenblatt, UPI)

The offense perked up after Jarrell Jackson’s 24 yard gain from Blaine Gabbert on a first and 24 after Andrew Jones got called for a 15 yard penalty.  Two plays later, Gabbert swung a pass behind the line of scrimmage to Danario Alexander who had Jared Perry wide open at the goal line for a 40 yard touchdown pass for a 7-0 lead. 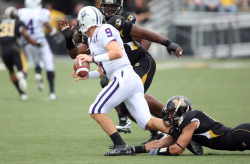 On the Paladins next possession, Andrew Gachkar got his first career sack dropping quarterback Jordan Sorrells for a nine yard loss.  (Bill Greenblatt, UPI)  After a penalty, Furman was left with a 2 nd and 24 from their 28.  Two incomplete passes forced a third Furman punt in the first quarter.  A catch interference penalty gave Mizzou the ball at Furman’s 48.  Gabbert pump faked and hit Jared Perry for his second touchdown on consecutive possessions, just 2:25 apart.  It is Perry’s first multi-TD game of his career.

On MU’s first possession of the 2 nd quarter, Gabbert drilled a pass into Perry giving Mizzou a first down at Furman’s 40.  Gabbert ran a keeper on the option, bounced off a tackler and motored 40 yards for the touchdown and a 21-0 lead.

On the Tigers fourth possession in a row, they found the end zone again.  Gabbert hit Alexander with a 13 yard pass to cap a 10 play, 75 yard drive and the rout was on.

With 3:55 to go in the first half, defensive end Jacquies Smith, picked off a Jordan Sorrells screen pass and went 43 yards for the score.  From their own 23, with 1:10 left in the first half,  Gabbert engineered a perfect hurry up drill, going 5 for 5 moving the Tigers down the field in :59 to make it a 42-0 lead after finding Alexander for a 17 yard touchdown.  That touchdown was Alexander’s first multi-TD game of his career.

Gabbert played into the third quarter and finished 17 of 25 for 256 yards and three TDs.  Perry had seven grabs for 161 yards and Alexander with three catches for 46 yards and two scores.

Furman came out midway through the third quarter with a three play 75 yard drive to break the shut out.  The extra point was missed.  This came after Sean Weatherspoon striped a Furman running back at the five yard line to kept the shut out in tack on the previous Palidan possession.  Derrick Washington capped off a 12 play, 67 yard drive with a one yard touchdown run to make it 49-6.  Grant Ressel added a 45 yard field goal in the fourth quarter.