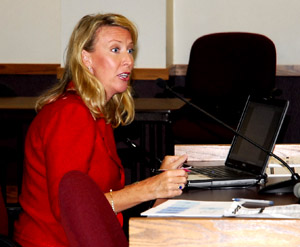 Legislators also heard from those who have children with autism, such as Lorri Unumb of South Carolina, who says Applied Behavior Analysis, while it’s not a cure, makes all the difference.

Responding to Unumb’s testimony is Representative Dwight Scharnhorst of Manchester, chairman of the committee. He says something has to be done, and he’s heard his peers put a negative spin on the initiative to get legislation pushed through.

The committee will meet two more times before using the testimony heard to craft autism legislation for the 2010 session.

Lobbyists for insurance have been speaking out against legislation that would mandate coverage. Governor Nixon is pressing the General Assembly to join 15 other states in mandating insurance companies pay for treatment for people with autism. A bill failed to pass last session.