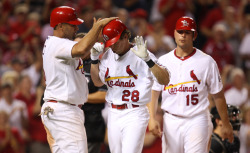 Todd Wellemeyer was making a spot start and even after he was spotted a four run lead after the first inning, he still struggled and left after four innings trailing 6-4.  The bats rallied again and the bullpen shut down Florida for an 11-6 win.  (photo by Bill Greenblatt, UPI)

Matt Holliday singled in Skip Schumaker, who singled to lead off the game, and Albert Pujols who doubled.  Holliday then scored along with Colby Rasmus on a single from Ryan Ludwick as the Cardinals struck quick against Marlins starter Ricky Nolasco.  They would get to Nolasco later.

Wellemeyer was leading 4-2 in the fourth when he gave four runs when Chris Coghlan tripled in two and scored one batter later on a Nick Johnson home run.  The Florida lead wouldn’t last long.  In the bottom of the inning, Julio Lugo tripled in two runs and scored on a sac fly from Pujols to go back on top 7-6.

From there the bullpen shut down Florida and the Cardinals added four in the eighth thanks in part to a three run homer by Colby Rasmus, his 15th of the year.  Nolasco was charged with seven runs and the loss.  Blake Hawksworth pitched an inning and a third for his fourth win.