The state auditor’s office has released its findings after looking into the general assembly. 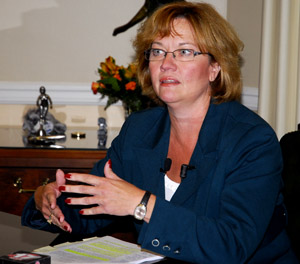 The Senate has expenses, the House has hours. That’s the findings of State Auditor Susan Montee’s staff after reviewing the general assembly’s books.

Montee says the senate has a separate bank account for lobbyist donations for things like lapel pins and Christmas parties. The account received about 76 thousand dollars over five years.

While she says that’s legal, those expenditures still need to be reported.

The House of Representatives, Montee says, needs to enforce a 40-hour workweek for its staff just like the rest of the state. She says she recognizes that staff might pull longer hours during the legislative session, but says it still is only balanced against a 35-hour work week.

To view the full audit on each legislative body, go to http://auditor.mo.gov/auditreports/pr2009.htm ,

To listen to Montee discuss the findings, click the audio link below.