The 2009 Tour of Missouri has given a lot of Missourians a chance to see some world class professional bicycle racing and has given others a chance to spread the word about Missouri wines. Missouri Wines – the promotional vehicle of the Missouri Wine and Grape Board – was a part of this year’s Tour every stage of the way. In fact, it’s been associated with the event since it started in 2007. 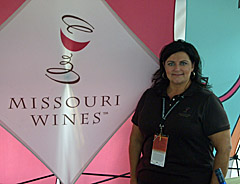 Danene Beedle, Marketing Director with Missouri Wines, says promoting Missouri and its wine industry has been a lot of fun.

"It’s really exciting, you know, to have people from all over – not only this country – but other countries have the exposure to cycling in Missouri and then also learn about the wine culture that we have here," said Beedle in an interview with the Missourinet.

Bicycling and wine are a natural mix in Europe and other places in which these world class athletes are as well known as football of baseball players are known in this country.

"This is really a lifestyle event, just like tailgating is for football," said Beedle. "Wine and enjoying the countryside and stopping off at little places along the way – it’s part of cycling and it’s part of the culture."

Beedle says Missouri Wines’ sponsorship of this event helps to promote this Show-Me State product overseas, but the prime target is the American consumer who might consider quality Missouri wines rather than those from California or Europe.