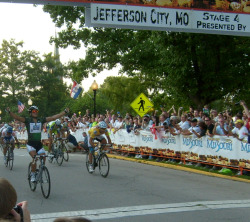 Argentina’s Juan Jose Haedo is on top of the Tour of Missouri with the win at Stage 4.   He finished the 109.2-mile trek from St. James to Jefferson City in 4.07’55". Stage 3 winner, Thor Hushovd, finished second, and Italy’s Dario Cataldo was third again.

Steve Walsh of the Missourinet caught up (literally) with Haedo after the race.  "It was my first year ever (to wear yellow jersey). I’ll be processing it all night. Today I reached the right energy level at the right moment ," said Haedo.

Great Britain’s Mark Cavendish who won the first two stages, had to withdraw due to an infection in his lungs.  Cavendish is one of the tour’s top sprinters.

For the first time since its inaugural year in 2007, the 2009 Tour will route east to west, starting in St. Louis and finishing in Kansas City. The past two years, the race routed west to east, starting in Kansas City and finishing in St. Louis. There will be two circuit races (St. Louis, Kansas City), one individual time trial (Sedalia), and four point to point road races (Ste. Genevieve to Cape Girardeau; Farmington to Rolla; St. James to Jefferson City; Chillicothe to St. Joseph). The overall mileage for the course is 612 miles. For all event information, visit www.tourofmissouri.com .

Previous Post: « Congressman says remembering is not enough on 9/11
Next Post: Cassel will be a game time decision »