We have reached the halfway point in the 2009 Tour of Missouri bicycle race with the completion of Stage 4, which saw the bicyclists racing from St. James to the State Capitol in Jefferson City. And while cycling enthusiasts were thrilled to see J.J. Haedo of Argentina win Stage 4 and move into the overall lead in the week-long race, many of those who gathered at the Capitol in the hours prior to Haedo crossing the finish line were there to take in the atmosphere. 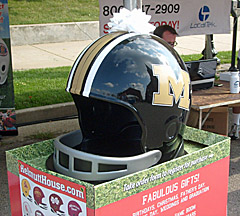 And the atmosphere included vendors selling souvenirs from t-shirts to ball caps. There were people promoting the 2010 Census, urging one and all to count themselves in. There was an Anheuser-Busch tent offering free adult beverages to those old enough to knock back a cold one. And there was a kiosk featuring Fan’s Best Friend – the Helmutt House.

"It’s for furry fans and their loyal owners," said Fan’s Best Friend CFO Lana Kentner of the football helmut-shaped doghouse. "We have fifteen college teams, currently, and we’re going to be getting more. Our line is going to be expanding to baseball, basketball, soccer, you name it."

The University of Missouri helmet, complete with the school’s colors, is part of the lineup. But the connection to the Show-Me State goes far beyond the "M" for Missouri on a helmet-shaped dog house.

"It’s actually a Missouri product," said Kentner. "We are making it in Lebanon, Missouri, at a company called MEP that makes boat parts. So, we’re basically preserving 200 jobs by keeping the Helmutt Houses here in Missouri."

That’s right. It’s spelled HelMUTT. It is a dog house, after all. But it’s not only a dog house. Kentner says some people will borrow Fido’s home and take it to tailgate parties, making sure to return it to their canine companion for bedtime.

The Helmutt House can be had for just a tad under $400.

"They’re $399.95 at the standard size, that has automotive grade paint, weather-proof decals, you can have it outdoors just like you have your car outdoors," said Kentner.

And 10 percent of the price goes to Mizzou or the college Helmutt House purchased.

Kentner says setting up shop at a number of stops along the Tour of Missouri route has allowed her to promote her product – a product she says has caught the imagination of so many of the people who have come by the Helmutt House booth.