Opponents of a legal challenge to the Quality Home Care Act, which was approved by Missouri voters last year, are making known their frustrations over the court action and the delays in implementing the Act.

Passage of the referendum created the Quality Home Care Council, whose task is to recruit home care workers to the elderly under the Medicaid program. Workers would also be allowed to unionize, but could not strike. 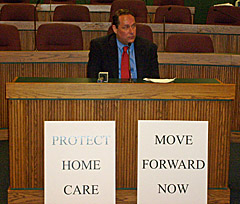 Integra Health Services/Integrity Home Care has filed a lawsuit, challenging the legitimacy of the state’s home care council. That is viewed by former State Senator Chuck Graham (D-Columbia), and other opponents of the challenge, as a delaying tactic.

"Right now we’re bogged down in court," said Graham during a news conference in a State Capitol hearing room. "We think we’re going to prevail but we want to just keep moving forward."

Graham, a consultant to the Missouri Home Care Union, says Integra will not accept the results of the referendum and the desire by 85 percent of workers to unionize.

Graham was joined by several others – those providing and those receiving home care. But with a referendum and a union election won, why hold a news conference to cover already-plowed ground? The lawsuit will be heard Monday in Cole County Circuit Court. But Graham insists he is not trying to influence the judge in the case – Judge Byron Kinder.

"We’re certainly not trying to influence any judges, especially Judge Kinder," said Graham. "I know Judge Kinder very well and a press conference is not going to do that."

Graham insists the news conference was simply an attempt to inform people of the situation.