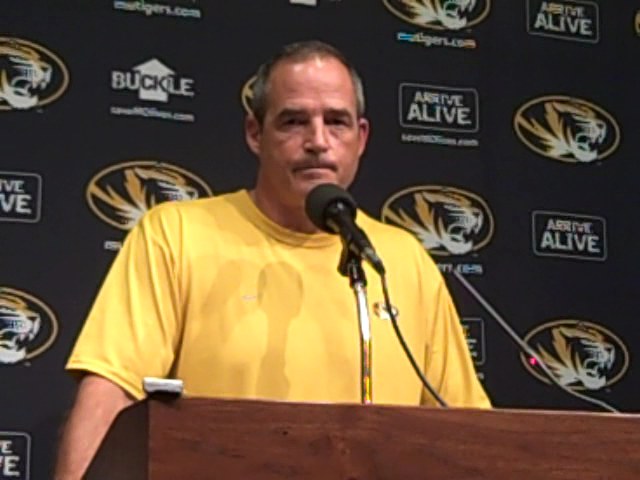 The Missouri Tigers play host to the Bowling Green Falcons Saturday night at Faurot Field.  While the Tigers are riding high and looking to continue the momentum built from their huge 37-9 win over rival Illinois in St. Louis, Mo. last weekend, head coach Gary Pinkel is wary of a very good Falcons team.  (Click to watch video of Gary Pinkel)

One reason for Pinkel’s concern is that Bowling Green leads the overall series against Mizzou 3-1 and 2-1 in Columbia with their last win coming in 2001.  While this current team was in grade school the last time these teams met, Pinkel wanted to make a point to talk about previous games against Bowling Green to show the potential this program and the MAC conference have at defeating top tier teams.

Bowling Green comes to Columbia after winning 31-14 at home over Troy last Thursday to give first year coach Dave Clawson his first win.  The Falcons were down 14-0 in the second quarter and scored 31 straight points,  including a 24-0 run in the second half to pull away for the win.  Falcon QB Tyler Sheehan had a big game, as he completed 32-of-44 passes for 339 yards and 2 TDs (1 INT), with receiver Freddie Barnes grabbing 15 of those passes for 157 yards and 2  TDs.  Bowling Green was held to just 50 yards net rushing on 28 carries, for an average of 1.8 per carry.  The Falcon defense intercepted Troy twice in the game, including one that was returned 64 yards for a TD with 2:14 left in the game to seal the deal.

Mizzou quarterback Blaine Gabbert will look to build off his impressive stats from his first collegiate start.  In the game, sophomore Gabbert threw for 319 yards and 3 TDs, while rushing for a fourth score, and the Tiger defense shut down an Illini offense that was tops in the Big Ten Conference a year ago.

One injury note:  Running back De’Vion Moore has a high ankle sprain.   He was walking around in a boot and will be re-evaluated in a week.  This will open up some playing opportunity for true freshmen Kendial Lawrence along with Gilbert Moye who missed the Illinois game due to family reasons.

Click to listen to comments from Gary Pinkel during his Monday afternoon press conference.