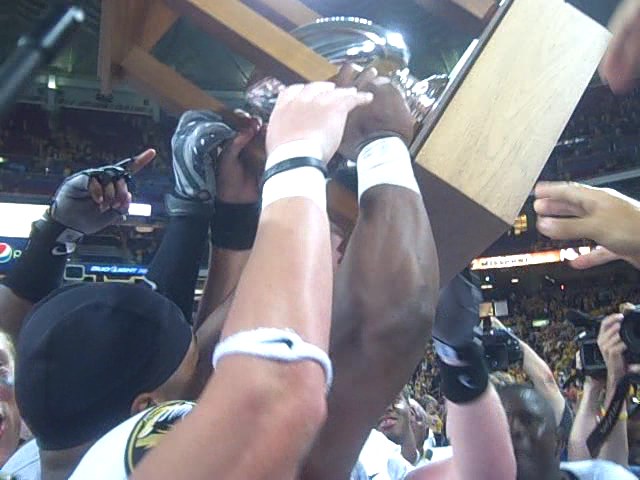 Chase who?  Blaine Gabbert made a major statement with his arm and his legs in his first collegiate start.   Gabbert threw for 25 of 33 for 319 yards and three touchdowns as the Missouri Tigers open the 2009 season with an impressive 37-9 win over Illinois at the dome in St. Louis.

Missouri’s first two possessions were impressive.   After Illinois punted on their first drive, Mizzou started at their own seven yard line.  Derrick Washington’s first run was a loss of two yards.  It wasn’t where you wanted to set up Gabbert for his first pass attempt, throwing from the end zone, but Gabbert found Danario Alexander for a 16 yard gain and a first down.  From there his confidence grew. 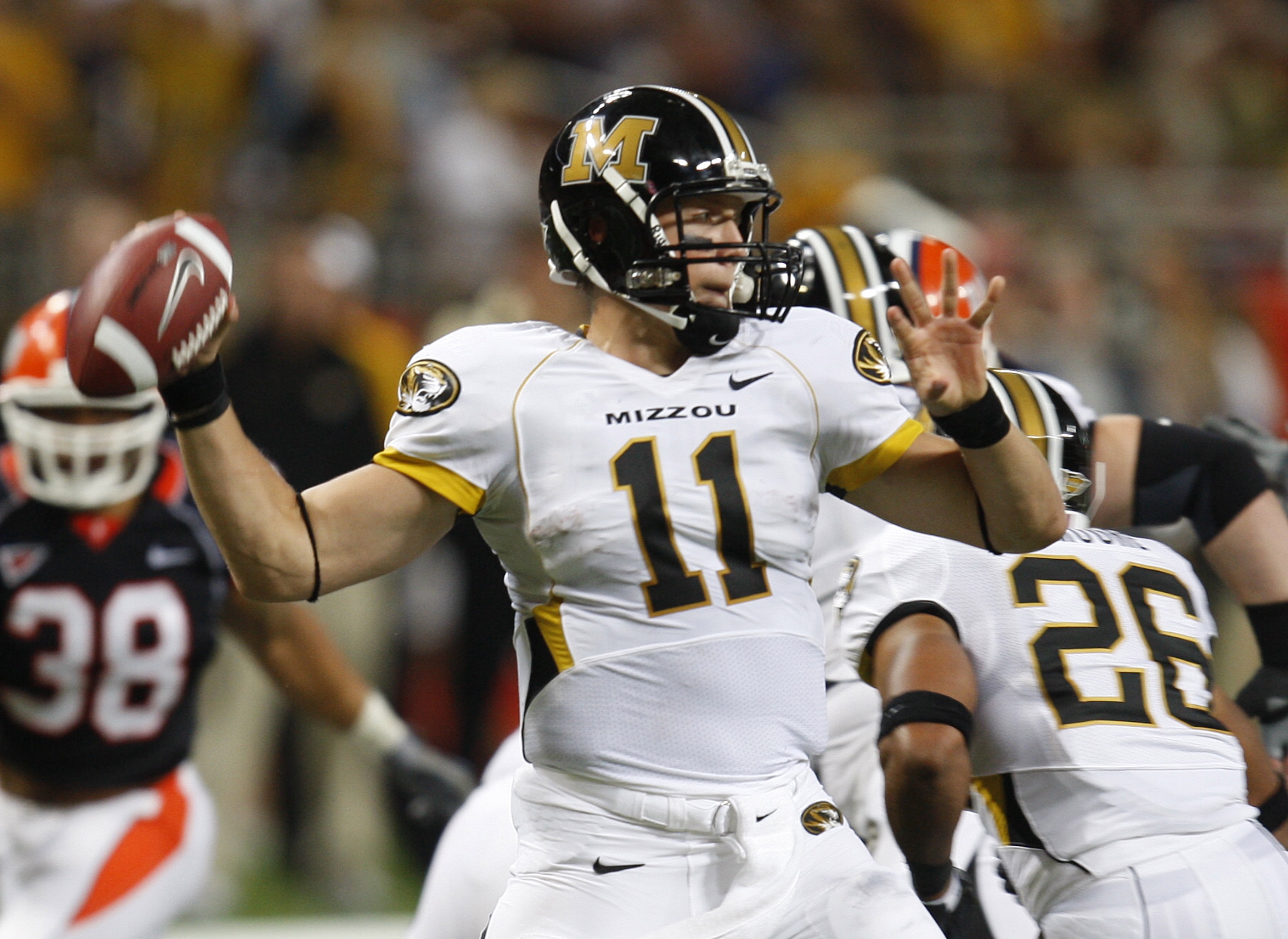 Gabbert (photo courtesy of Bill Greenblatt, UPI) was 5 of 6 on his opening drive and while he got called for an intentional grounding penalty that stalled the drive, he got the Tigers in field goal position for Grant Ressel to hit a 32 yard field goal.  After an Illinois three and out, Missouri took over and established Gabbert with the run.  He reeled off runs of 14 and 11.  Then he showed his arm strength.  At the Illinois 49, Gabbert threaded a pass through two Illini defenders and zipped it into Wes Kemp who sprinted down the sideline 30 yards for a touchdown to put Mizzou up 10-0.

Juice Williams, playing without his top receiver Arrelious Benn who went down on the third play of the game with an ankle sprain, managed to get Illinois down deep in Missouri territory, but came up short on a third and one play and settled for a 24 yard field goal 1:20 into the second quarter.

A key swing in the 2 nd quarter came when Missouri got called for a roughing the punter call after what would have been a three and out with 7:00 to go in the half.  Illinois gained some momentum and drove down to the Missouri 20 but on fourth and one, Illini QB Juice Williams stumbled and fell down at the 24 ending the Illini scoring threat.  Gabbert led the Tigers down for a 41 yard field goal, Ressel’s  third of the game for a 16-3 halftime lead.  An interception by Hardy Ricks earlier in the second quarter, set up Ressel’s second field goal.

The Tigers came out of the third quarter and put together an 81 yard drive capped by a three yard touchdown pass from Gabbert to Jerrel Jackson.  That came two plays after Gabbert found Alexander wide open on a third and 12 completion where Alexander scampered down to the three.

On Illinois’ next possession, the Illini were driving when Walter Aikens recovered Jeff Cumberland’s fumble after he got passed the first down marker beating cornerback Carl Gettis.   After a three and out by Mizzou, the Tigers got the ball back after stopping Illinois.  Mizzou drove 70 yards and scored on a screen pass from Gabbert to Jared Perry that turned into a 46 yard touchdown.  The corner guarding Perry came on a blitz leaving Perry wide open and nobody picked him up.

Illinois drove down the field and scored from two yards out less than two minutes into the fourth quarter, but missed the extra point making the score 30-9 with 13:19 to play.

Missouri continued to pour it on.  On a third and 19, after an illegal blocking penalty, Gabbert found Perry on a fly down the sideline for 21 yards and a first  down.  Derrick Washington had a 32 yard run that took the ball down to the 10.  Two plays later, Gabbert scampered in for the final score.