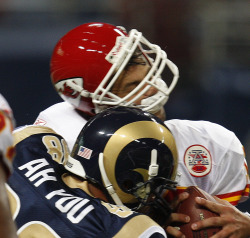 Even with Todd Haley calling the plays, the Chiefs were unable to get into the end zone and lost their fourth preseason game falling to the Rams’ in the Governor’s Cup 17-9.  (Croyle crunched in the first half.  Photo courtesy of Bill Greenblatt, UPI)

I wouldn’t say Haley’s play calling was the reason for the loss.  I would blame it more on the quarterback play.  Three times in the first half, the Chiefs were able to get into the red zone but had to settle for Ryan Succop field goals.  He connected from 31, 40, and then 34 in the first half.

Brodie Croyle was just 5 of 16 for 78 yard as he played the first half.  In what Haley called the battle for the back up job, Tyler Thigpen didn’t do any better.  He was 2 of 7 for 49 yards and he got picked off twice including a 28 yard interception return by Quincy Butler, the Rams second defensive touchdown in two weeks. 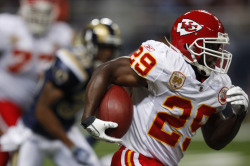 The Chiefs running game showed a couple of bright spots.  Larry Johnson broke off a big run and finished with 58 yards and five carries and Dantrell Savage rattled off a 70 yard run. (photo courtesy of Bill Greenblatt, UPI)

After four games, my assessment of the Chiefs is this:  The offense does have the opportunity to play better with Matt Cassel under center. The running game has looked better than last year and it’s clear Croyle and Thigpen cannot lead this offense. 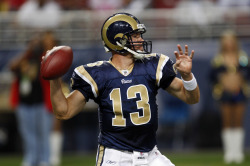 The Rams had their own quarterback battle taking place as Brock Berlin was fighting with Keith Null for the number three spot.  Both QBs finished 9 for 17 with Berlin throwing a six yard touchdown pass in the second quarter.  I think when all is said and done, Berlin will hold onto the number three job. (Photo courtesy of Bill Greenblatt)

The Rams offense will struggle.  Marc Bulger has not seen any type of action since breaking his pinkie finger.  How can one expect Bulger to come in with little practice under his third offensive system in three years and be effective?  I’m encouraged by the Rams defense.  They creating turnovers, tackling better than last year, but three road games in the first four could lead to a slow start.