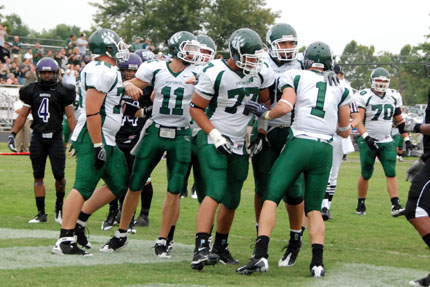 The Bearcats of Northwest Missouri State scored the final 35 points in a 49-14 win against the Bearcats of Southwest Baptist Thursday at Plaster Stadium in Bolivar, MO.  (Photo courtesy of NorthwestBearcats.com )

Steven Gachette accounted for all but 20 of Southwest Baptist’s 327 yards of offense. He completed 30-of-46 passes for 267 yards and carried 20 times for 40. He connected with wide out Johnnie King nine times for 116 yards, including an 18-yard touchdown toss early in the second quarter that tied the game at 7-7.

Northwest led 14-7 at halftime and drove past midfield to start the third quarter when Bolles had a passed tipped in the air and intercepted by Tyrin Holt, who was tackled two yards shy of the end zone. Gachette ran in from there to tie the game at 14-14.

Northwest led 21-14 when Gachette was intercepted by defensive lineman Micah Wilson at the Northwest 11-yard line. Bolles hit Soy with the 89-yard score two plays later to pull ahead by two scores. It was the second of five straight touchdown drives by Northwest.

Portions of this story courtesy of Bryan Boettcher of Northwest Missouri State.