Gov. Nixon and Sen. Bond joined Gen. Stephen L. Danner and other members of the Missouri National Guard at the Ike Skelton Training Site to support the Agri-Business Development Team as they prepare to deploy to Afghanistan. 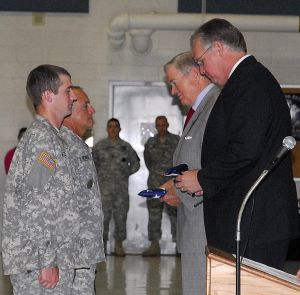 “In your mission you are literally sowing the seeds of peace in Afghanistan by contributing to that country’s long term stability and thus, America’s security,” Bond said. “Our nation owes all of you and your families a tremendous debt for your selfless service.”

The citizen soldiers’ family was also at the ceremony, which was led by presentation of the colors, the National Anthem on violin, and a prayer by the Guard Chaplain.

During the ceremony, Bond emphasized that America needs a “Smart Power” strategy in Afghanistan, which includes a combination of military might with economic, development, educational, and diplomatic strategies.

“Smart power recognizes that helping other societies become more stable makes Americans safer and there is no greater association of patriots better positioned to execute our nation’s ‘Smart Power’ than the citizen soldiers and airmen of the National Guard,” he said. “If our forces in the surge follow the ADT model of putting the Afghanistan people first, we can succeed.”

Thanks to the ADT’s hard work, poppy production in Nangarhar province has virtually been eliminated and 10 other states have ADTs in Afghanistan, he said. Last month, Bond hosted Safi Mohammad Hussein, the Director of Agriculture, Irrigation, and Livestock of Afghanistan’s Nangarhar Province, in a visit to the State Fair in Sedalia, Missouri to build upon the relationship between Missourians and Afghan farmers.

Nixon said it was his honor to see Missouri’s hard work overseas. He touched upon his trip there recently, where he saw firsthand the guard’s efforts.

“During my trip to the Middle East in July, I quickly saw that Missouri is well-represented among those serving in our regular armed forces, the Reserves, and in the National Guard.

I had the pleasure of sitting down with many of them to address their questions and concerns, to take personal messages from them to convey to their families back home, and to let them know their fellow Missourians are supporting them,” he said. “I met many courageous and prepared soldiers, including your predecessors who are part of ADT II in Afghanistan. I saw first-hand how they are not only carrying out their military mission, they are using their skills and technology from Missouri to help local farmers produce successful crops, so Afghanistan can work toward feeding itself.”

Nixon said he thought he saw a sign from MoDOT at the base, but said we would “not be asking for it back, nor will we be asking you to leave it there.” He also took the opportunity to mention that it was his honor to let the Governor of Texas know that while Missouri and Texas are working together in this effort, Missouri is definitely leading the way, drawing laughter from the guardsmen and their families.

Nixon said each place he visited — Iraq, Kuwait, Afghanistan and Germany — the troops were all extremely professional and dedicated to the task they have been given.

“You know that the job you have is not easy, but you and your fellow soldiers are making significant strides in bringing peace and freedom around the world,” he said in closing. “On behalf of the people of Missouri, I wish you a safe and successful mission. What you will be doing during your deployment is vital to the security of both the United States and Afghanistan. In fulfilling your mission, you will be protecting innocent lives and making America and the world safer. All of Missouri takes pride in what you are doing, and we join your families in praying for your safe return soon. Thank you, and may God bless your efforts.”