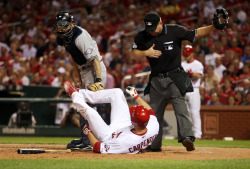 Cardinals starting pitcher Chris Carpenter may have been down, but he certainly wasn’t out.  He didn’t have his best stuff, but had enough when he needed it.  It also helped that the offense scored six runs in the second fueled by Carpenter getting hit by a pitch from Milwaukee’s Dave Bush. (Photo courtesy of Bill Greenblatt, UPI)

After the first two runners got on base, Carpenter tried to lay down a bunt, but got hit by the pitch.  That loaded the bases and unraveled Bush as the Cardinals made him pay for that mistake in a 10-3 win.

That helped give Carpenter his 15 th win of the year.  He went six innings giving up three runs on eight hits and three walks.  I was looking over the roster from the Cardinals’ World Series team in 2006.  There are only seven players who remain from that team and four of them played prominent roles in this win.

Schumaker, Pujols Carpenter and Yadier Molina who went 3 for 5 with two runs.  The Cardinals will rely on this leadership down the stretch.  While the magic number to clinch the division is 20, the focus needs to shift to LA and Philadelphia.  Both of those teams lost last night, so St. Louis and LA are tied with the best record in the National League.

The Cardinals have the second best home record in the National League behind San Francisco.  Below are comments from Carpenter, and Manager Tony LaRussa.