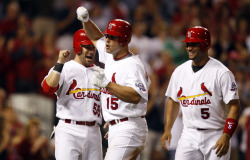 The Cardinals magic number for clinching the NL Central Division is 21, but the season’s magic number may as well be 15.  That’s Matt Holliday’s number.  Yesterday he came up big again in the seventh inning.  Holliday broke a 4-4 tie in with his 20 th homer of the year as the Cardinals beat Milwaukee 7-6.  (photo courtesy of Bill Greenblatt, UPI St. Louis)

Brewers relief pitcher David Weathers intentionally walked Albert Pujols with two outs to bring up Holliday.  Gene Macha went to the bullpen and called on Todd Coffey.  Holliday homered to center to put the Cardinals on top.  Ryan Franklin gave up two runs in the 9 th , but picked up his 36 th save the same day he learned his contract was extended two years with the club.  The team also gave lefty reliever Trever Miller a new contract for this season and 2010 with an option for 2011 which means the back end of the Cardinals bullpen could be together for two more seasons.

Pujols homered in the fourth inning off former Cardinal starter Braden Looper.  That was apart of a three run fourth inning to tie the game after Casey McGehee hit a three run homer of Joel Pineiro in the first inning.

Pineiro gave up a single to McGehee in the sixth, but the Cardinals struck back again in the bottom of the inning with two outs when Ryan Ludwick doubled and scored two batters later on Yadier Molina’s single.

Pineiro despite the off night had enough offense to give him his 14 th win of the season.