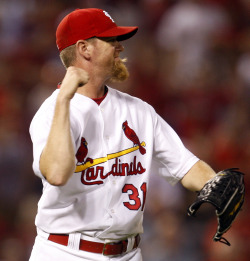 Cardinals’ closer Ryan Franklin and set up man, Trever Miller signed contract extensions yesterday that will keep the two pitchers in the St. Louis bullpen for a couple of years.

Franklin signed a two-year deal for 2010 and 2011, and Miller’s deal is a revision of 2009 and adds 2010, replacing his former one year deal he signed when he came over from Tampa.  There is also a vesting option for the 2011 season for Miller.

Franklin was an All-star this year and even though he gave up two runs in the game last night, his ERA is still just 1.36 while he picked up his 36th save.  Miller has been a key acquistion for the Cardinals.  This season, Miller is 4-0 with a 1.75 ERA.  He’s appeared in 57 games and pitched in just 36 innings, but has been used as a specialist.