As the Patients First "Hands off my healthcare" bus rolls through Missouri, people are taking the opportunity to voice their opposition to what many of them call "Obama-care." 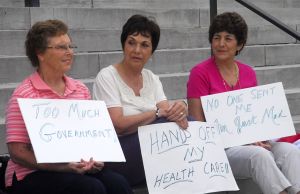 They’re signing a petition asking our Congressional delegates to vote down the healthcare reform measure in Washington, they’re holding up signs of protest and they’re speaking up. Warren Hollrah of Fulton says the government needs to support free enterprise instead of intervention.

He says the system needs to be tweaked but not taken over. Hollrah says tort reform is necessary, but that government should support free enterprise in the healthcare system.

Karen Mertens, also of Fulton, held a sign that said "No one sent me, I’m just mad."  She says she couldn’t make Senator McCaskill’s town hall forum on health care reform and wanted her opinion to be heard when the bus stopped at the Capitol.

Mertens says government needs to know that Americans can take care of themselves. She worries that a government takeover of the healthcare system will mean no one has a choice in choosing doctors or care facilities. As for the sign, she’s also mad about the spending in Washington and the cap and trade legislation.

Patients First is a project of Americans for Prosperity, a nonprofit organization. It’s a grassroots organization committed to "advancing every individual’s right to economic freedom and opportunity."