Two dramatic home runs leads the Cardinals to a 3 to 2 win last night at Busch Stadium.  It was the home debut of recently acquired pitcher John Smoltz.  He did not disappoint the 40,000 in attendance as he would go six innings, giving up just one run while striking out six. 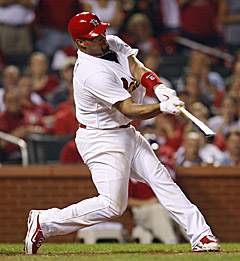 St. Louis would take score the first run of the game in the second, when Jadier Molina hit into a double play, which drove in Matt Holliday who had doubled to lead off the inning.

Washington would answer back in the top of the third with a run of their own.  A sacrifice fly by Pete Orr would score Alberto Gonzalez who had singled to start the inning.

The Nationals would take the lead in the seventh after they got back to back doubles off Cardinal pitcher Blake Hawksworth.

St. Louis would tie the game in their half of the eighth when pinch hitter Khalil Greene hit a solo home run.  Greene had not batted since August 20 th .  The home run was the first by Greene since he hit a home run in three straight game back in June.

Jason Motte was able to work out of a jam in the top of the ninth, and Alber Pujols would do the rest, as he led off the bottom of the inning with a walk off solo home run.  It was the first walk off home run for Pujols since July of 2006.

Same two teams tonight as Mitchell Boggs will get the start for the Cardinals against the Nationals Craig Stammen.  Game time is 6:15.