The St. Louis Cardinals made it two in a row over the Washington Nationals, downing the Nats 9-4 Saturday night at Busch Stadium in St. Louis. The victory keeps the Cardinals 9 games ahead of the Chicago Cubs in the National League’s Central Division after the Cubs downed the New York Mets earlier in the day. 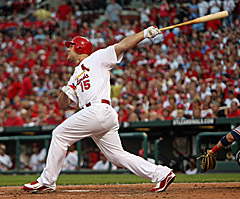 The Nationals jumped out to an early 1-0 lead, scoring a run off Redbirds’ starter Mitchell Boggs in the 1st inning as Christian Guzman tripled and scored on Ryan Zimmerman’s sacrifice fly to right.

Matt Holliday went deep in the 3rd of Washington starter Craig Stammen, blasting a 3-run, 398-foot home run to left field to put the Cards up 3-1. It was Holliday’s 19th round tripper of the season.

Washington got a run back in the 4th as Josh Willingham crossed the plate when Wil Nieves grounded into a fielder’s choice with the bases loaded. That made the score 3-2 for the Redbirds.

St. Louis picked up a 4 runs in the 5th. Their fourth of the night came when Washington shortstop Christian Guzman mishandled a Ryan Ludwick ground ball, allowing Albert Pujols, who had doubled, to score from second base. Colby Rasmus then smacked a 444-foot 3-run homer to right to put the Cardinals ahead 7-2.

The Nats made it 7-3 in the 6th as Adam Dunn hit a 418-foot homer to right field to lead of off the inning.

St. Louis made it 8-3 when in the Cards’ half of the 6th as Brendan Ryan singled to bring home Skip Schumaker who had hit a ground rule double. An Albert Pujols double, his second of the evening, then scored Ryan with the Cardinals’ 9th run.

Washington narrowed the lead to 9-4 in the 7th as Willie Harris, who had walked, scored on a Ryan Zimmerman single. But that was all the scoring the Nationals could muster.

The Cards and Nationals wrap up their weekend series Sunday afternoon at Busch Stadium with the Cards going for the sweep. Adam Wainwright (15-7) goes for his 16th victory for the Redbirds against Garrett Mock (3-5) for Washington.