The Patients First bus tour stopped in the Capitol City today, one stop among many in Missouri. 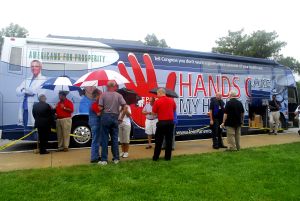 Organizer Carl Bearden says they’re collecting signatures from those opposed to the healthcare reform bill being debated in Washington and are urging folks to contact Senator McCaskill to voice their opposition.

Only a handful of concerned citizens showed up on the Capitol lawn to greet the bus today — in the rain — but Bearden says more than 200 people showed up at their stop in Camdenton.

The bus now heads to Rolla before heading towards Washington, Mo., today. 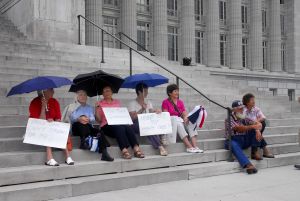 The bus then leaves Missouri and makes its way toward Washington, D.C., where it will stop on Sept. 12, making stops in various states to collect signatures and talk about the grassroots effort along the way.

For more on the tour, visit http://joinpatientsfirst.com/bus-tour .