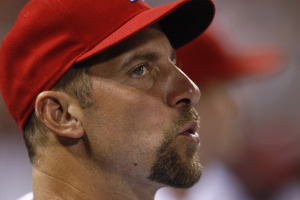 I decided to get out of the studio on Thursday afternoon and head to the Cardinals-Astros game.  I was hoping I had an opportunity to visit with John Smoltz and I found him in the clubhouse before the game.  I wanted to talk with him about reviving his career in St. Louis, what it was like to play with a kid he virtually saw grow up before his eyes.  Here’s my visit with John Smoltz.

Smoltz will make his second start with the Cardinals on Friday, August 28 th against Washington.  He talks about the adjustments he had to make to his pitching mechanics and believing in himself that he could still pitch.

He’s excited about getting the opportunity in St. Louis and is thrilled to be sitting alongside Adam Wainwright, who was a number one draft pick by Atlanta.  Smoltz said he never would have imagined he’d be pitching with Wainwright again after Atlanta traded him, Jason Marquis, and Ray King for JD Drew and Eli Marrero.

I hope his smile comes across in his voice when I ask him what it would be like to pitch again with Maddux and Glavine.