A sometimes rowdy crowd greeted Senator Claire McCaskill as she hosted another in a series of health care town halls throughout the state during the August congressional recess. Wednesday evening’s forum took place in a Jefferson City middle school, with a crowd of about 400 jammed into the school’s cafeteria. Perhaps a hundred or more were not able to enter the building because of fire code restrictions. 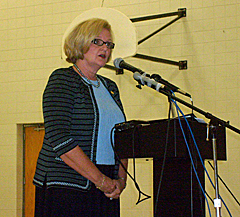 The Senator started with some brief comments before opening the floor to questions submitted by many of those in attendance. The hour-long question-and-answer session saw McCaskill take questions on a wide range of topics – primarily from people expressing concerns about health care reform. Issues dealt with included so-called death panels – which McCaskill says would not exist, fear of cost overruns should the government take control of health care, worries about tax increases to pay for health care reform – McCaskill says she will not support increasing taxes on anyone making less than $250,000 a year, concerns that abortions might be provided at taxpayer expense – which McCaskill says she will not support, and the question of whether the government has the right to mandate health care coverage – the Senator says it does.

There were several times during the course of the forum that McCaskill calmly, bur firmly, asked members of the audience to tone it down.

"Ma’am," said McCaskill during one such confrontation, "I just gotta tell you, I respect your right to be angry and mad but you cannot yell out."

After being challenged by an audience member, McCaskill asked the individual to surrender the floor.

"It’s your right not to believe me, it’s your right in a democracy to be angry," said McCaskill. "With all due respect, ma’am, the kids that come to this school – they are taught these things – respect, and tolerance. And, all I’m asking you to do is to allow other people to participate."

One of the questions put to McCaskill plainly pointed to expected costs that would be associated with health care reform.

"How do we pay without bankrupting the country?" read the question that had been submitted.

"I can’t vote for a bill that’s not deficit neutral," responded McCaskill.

McCaskill’s answer did not address the fears of some members of the crowd who later offered thoughts that deficit neutrality could be maintained through increased taxes and/or through limits on access to medical services – neither of which they want.

The crowd gave McCaskill a warm round of applause as she concluded the event. She’ll meet with doctors in St. Louis on Thursday. Town halls resume Monday with forums in West Plains and Springfield.