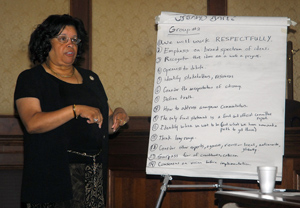 The Senate Educated Citizenry 2020 Committee has made some headway in defining its role within the state education system.

With the help of a consultant, the committee workshoppedideas and goals as to how to function in the legislative process, aswell as work with stakeholders, agencies, schools and communities.

Sen. Jeff Smith (D-St. Louis),vice-chairman, resigned from state office yesterday. Pearce says he’s been a driving force behind charter schools in St. Louis and adding expertise to the committee. Pearce doesn’t know exactly how his vacancy will be filled at this point.

"I believe I have a lot to learn on this committee," Shoemyer, who served on the House Education Committee, said. "Some ofthe things we need to aggressively be seeking, in many peoples minds,may not be education. We need to get this superhighway across this state. It’smore than surfing the Internet. We need to connect our ruralcommunities with our urban communities, it doesn’t matter if you’re a democrator republican.  I’m going to work very hard to open my mind and beobjective on this committee.

Wright-Jones, a former classroom teacher, says Missouri needs to make sure students are receiving the proper courses to geton the cutting edge. She points to the animal science on west, plant sciences on east. "That’s the economy of the future and we need to get on board with that."

Chris Roberts, the committee’s consultant, presented the group with a task: to dream realistically; what will be true for Missouri and its citizens in 2020?

WHY: Better decisions, better use of resources, clear direction.

WHAT: Vision statement; five or so big ideas; plan

HOW: Where are we now? Where do we want to be? How do we get there?

She also warned them about the "kisses of death" and cautioned them to avoid making decisions that would result in failure:

Rhetoric rather than action;

The committee was established this year under Senate Resolution 304and is responsible for creating long-term plans and strategies fordeveloping an educational system where Missouri students learn to beproductive and successful citizens who are prepared for globalcompetition.

"On the first day of the 2009 legislative session, Ichallenged senators to move our state from a short-sighted andreactionary organization to one with a long-term vision and strategicplan. I made this challenge because I believe we must first decidewhere we want our state to be in ten years, and then determine how bestto get there," Senate Leader Charlie Sheilds says.

"The members of the Missouri Senate accepted that challengeby voting to create three new committees to develop strategic plans forimproving job creation, bringing more people into health coverage, andeducating our citizenry. These panels known as the "2020 committees"are charged with defining where Missouri should be in the areas of jobcreation, healthcare, and education in the year 2020."

"The caveat is that I named only senators serving in theirfirst term to the committees, as they have a more vested interest intheir success long-term."